Apotheosis means elevation to divine status, or deification. George Washington has been elevated to a god. The United States capitol dome interior has an overhead painting in the "heavens." Figures in the overhead painting - an allegorical glorification of the first President - were drawn as much a 15 feet high to seem life-size from the Rotunda floor 180 feet below. The "Apotheosis of Washington" covers 4,664 square feet of concave surface. Constantino Brumidi worked the fresco in 1865. Gods and mortals mingle in the Dome's fresco heavens.  These ancient gods are not part of Christianity. Jesus Christ is the Son of God and we are commanded by Him to worship only one god, Almighty God, our Father in Heaven.

One Nation Under the gods 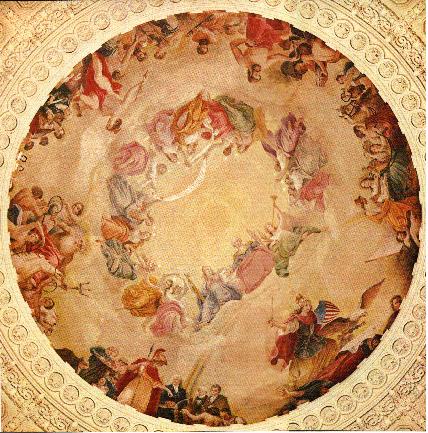 Click on each area for close-ups. Forms in the inner circle represent the 13 original states and the Union; Washington sits between Liberty and laureled Victory. Outer groups - clock-wise from sword-wielding Freedom - symbolize arts and sciences, marine, commerce, mechanics, and agriculture.